The complete guide to the gorge of Samaria - part 1 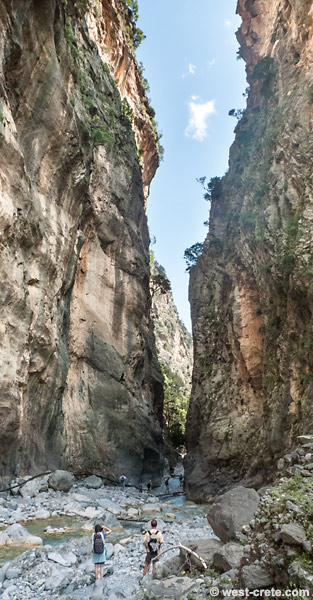 The gorge of Samaria is situated in the National park of Samaria, in the White Mountains in West Crete. This majestuous gorge is considered one of the great attractions of Crete and many tourists want to visit it. But you must realise that it is a long (5 to 7 hours) walk on rough terrain so you will need to have a certain degree of fitness and walking experience in order to enjoy it.

Opening times of the gorge of Samaria: in 2021 it will open on the 12th of June

The Samaria National Park has traditionally always opened to the public at the beginning of May. It has often been possible to enter the gorge of Samaria at some point in April from the bottom part but this depends on the weather and the amount of work needed to restore the path after the winter rains.
So the opening dates of the gorge vary: it could open a little before the 1st of May, on the 1st of May or later (if the weather is bad or repair work is late). You can read a little more information about it at this short article When will the gorge of Samaria open this year? It was written in 2012 but it's always relevant.

The gorge of Samaria closes to the public at the end of October. but may close earlier if autumn rains (not uncommon in October) damage the path or make some cliffs unstable.

The gorge will also be closed on rainy days (when there is a danger of rock falls).

In winter, high water makes the gorge of Samaria dangerous and impassable.

The park opens daily at daylight (so the exact time will vary depending on the time of the year) and closes in the evening. If you want to enter the park after around 14.00 you will not be allowed past the first quarter of the walk and will need to return to your starting point.

You have to pay an entrance fee of Euro 5.00 to enter the park (free to children under 15, half price to students).

Dispelling a few myths about Samaria

It seems that most of what has been written about the gorge of Samaria was plagiarized from the same original source. This means that the same errors have been repeated almost everywhere.

The infrastructure of the National park of Samaria

The park is supervised by the Department of Forestry and is one of a dozen national parks in Greece. You need to pay an entrance fee of 5 Euro (free to children under 15).

The gorge is open only during the day time and if you want to start walking in the afternoon you will only be allowed in up to a certain point. The guards want to make sure that everybody who walks in also gets out before nightfall. This is the reason why they ask you to present your ticket on the way out as it (supposedly) enables them to know if there is anyone still in the park at night.

When is the best time to walk through the gorge?

The problem with Samaria is that it can be really crowded. The gorge of Samaria has become one of the 'musts' if you go to Crete and there could be over 2000 visitors a day on a very busy day (see visitors statistics here). If you have the bad luck to pick one of those days, the atmosphere will be really spoilt.

Starting at dawn (before the tourist coaches arrive) will give you a bit of a head start. Spend the night in Omalos where you can easily find good and cheap accommodation and you will not have any traveling time in the morning
The first tourist buses arrive at around 7.30 am and from then on it is an uninterrupted stream of buses until about 10.30 or 11.00 am.

You can also start walking after 11.30 or 12.00, there won't be many people but you will most probably need to spend the night in Agia Roumeli because the last boat out will have left when you get there.

As far as the times of the year are concerned, the best time is in the spring when the weather is still cool and the vegetation is at its best. The worst time is in the middle of the summer during a heat wave. Give it a miss and come again at a better time. 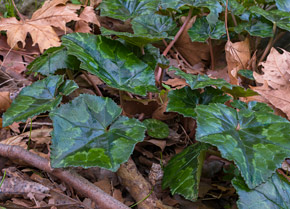 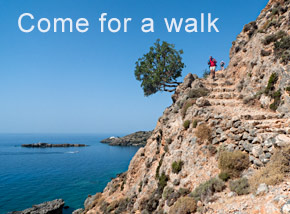