Where is Crete? - The geography of Crete 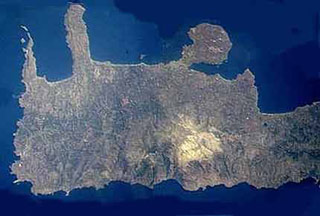 A mountainous island, it lies south of the Aegean Sea, a link between Europe, Africa and Asia. This geographical position, being at the junction of major civilizations and cultural currents, has influenced its history throughout the past 6000 years
The island has an elongated shape, 260 km long from east to west and between 15 and 60 km wide. The coastline is over 1000 km long and consists of both sandy beaches and rocky shores. The high mountains are a characteristic of the Cretan landscape. They form three mountain complexes, each with its own 'personality'. Between the ranges lie semi-mountainous zones which cover the greater part of the island. There are also a few low lying plains as well as a number of high plateaux.
Crete has about 600.000 inhabitants, of which over a third live in the towns of Iraklion, Chania and Rethymnon. The rest of the island is sparsely populated, with large tracts of mountainous areas frequented only by shepherds 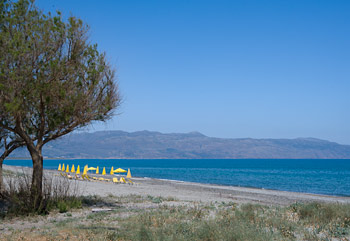