The peninsula of Akrotiri

The peninsula of Akrotiri is located to the east of Chania. It is rather barren and its northern end is lined by hills. The (military and civil) airport of Chania is located on the peninsula, about 13 km from Chania. The peninsula also houses many military installations belonging to NATO as well as an American naval base.

Akrotiri has few coastal resorts but some nice beaches which are popular at weekends with the inhabitants of Chania but fairly quiet during the week: Marathi, Kalathas and Stavros, a rather soulless village with a beautiful sandy cove (where the beach scenes in Alexis Zorbas were filmed). 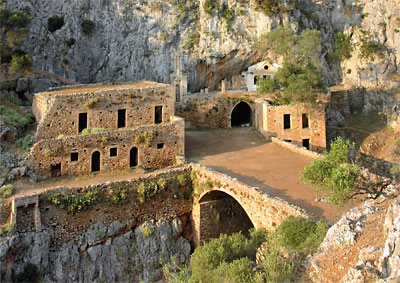 Akrotiri also has a few monasteries which are popular with visitors: the impressive Agia Triada was founded in the beginning of the 17th century and was a prominent religious school until about 50 years ago. It is well worth a visit but its atmosphere can be rather spoilt by the tour buses which alight there. Following a poor road for 4 km to the north of Agia Triada, the road ends at the 16th century Moni Gouverneto (Our Lady of the Angels). The building itself is quite plain but the church inside has a nice sculpted Venetian facade.

From Moni Gouverneto a good path heads down towards the north and the ruins of Moni Katholiko. On the way, after about 10 minutes walk you will pass the Bear Cave. It is a large chamber with a massive stalagmite in the middle resembling the shape of a bear. In antique times this cave was dedicated to the goddess Artemis.
After walking down for another 15 minutes you arrive at the 11th century monastery of Katholiko . It was abandoned in the 16th century because of the numerous raids by pirates. The monastery building spans a small gorge with a massive stone bridge. It is a quiet and cool place to rest.
From Katholiko, a small footpath follows the gorge to the sea where it is possible to have a swim from the rocks.