The district of Selino, south-west Crete 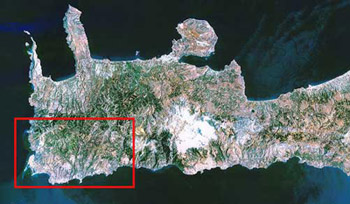 At the south-western corner of the Chania prefecture, Selino is a hilly agricultural region with spectacular views over the sea and a wealth of little villages notable for their Byzantine churches. The district was named after the 'Kastello Selino' fortress built by the Venetian in Paleochora in the 13th century.
The village of Kandanos is the capital of the province but tourists will know the region mainly for the two coastal resorts of Paleochora and Sougia.

Mass tourism has not yet discovered the region, probably due to the fact that Paleochora and Sougia (the only seaside villages of the province) can only be reached by a winding road and both are about 2 hours bus drive away from Chania (and almost 4 hours from Heraklion)

General information about the region

Selino is a comparatively large region which extends approximately from the west coast of Crete to the western foothills of the White Mountains. Its northern part starts at the North-South water dividing line of the hills and it ends on the shores of the Libyan sea to the South.

Selino is a fertile hilly region and its main products are olives and grapes on the southern hills of central Selino. Nowadays there are also some important greenhouse plantations near Paleochora and Elafonisi.
The capital of Selino is the village of Kandanos but its largest town is Paleochora with over 2000 inhabitants.

Getting there and getting around

There are now three main roads leading to Selino from the North of the Chania prefecture.
The first one leaves the coast a few kilometres west of Chania, passing through the villages of Vamvakopoulo, Agia, Alikiarnos and climbing up the hills until it reaches the pass of Petra Seli, entering the province of Selino.
The second route is along the north coast, past Agia Marina, Platanias and Maleme, turning off at Tavronitis and climbing through olive groves to the high point of Floria, then driving down to Kandanos, the capital village of Selino.
The third route used to be much longer but a road widening programme has turned it into what may be the easiest option to reach Paleochora: drive along the north coast until you reach the outskirts of Kastelli, turn inland towards Topolia and Strovles and you enter the Selino district. The road is wide, with slightly less curves than the other two options and passes through very lush countryside.
Whichever route you are choosing, count a little over 90 minutes to reach Paleochora or Sougia from Chania by car if you don't know the road and don't want to drive too fast.

If you travel by public bus there are only two options: the bus to Sougia and the bus to Paleochora from Chania.

It is also possible to reach Sougia and Paleochora by ferryboat from Hora Sfakion, Loutro and Agia Roumeli from April to the end of October.

Main localities and places of interest

The capital of the province (population: 914), Kandanos is located in the middle of old olive groves, on the foothills of the White Mountains. The village is mainly known for one of the worst episode of brutality perpetrated by the German invaders during W.W.II: in reprisals for the killing of 39 German soldiers in an ambush by Cretan freedom fighters, the village was razed to the ground on the 3rd of June 1941. It is interesting to note that this ambush had been planned with the active participation of women and children and the pope of the village and is a good example of the depth of the resistance of the Cretan population against the Nazis.
There is a large commemoration plate (in Greek and German) on the village square. 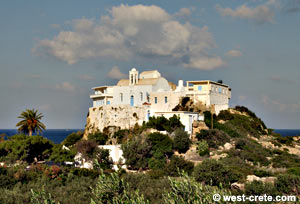 Situated at the south-western "corner" of Crete, the beach of the islet of Elafonisi ("deer island" in Greek) is more reminiscent of a South Sea lagoon than Crete: white and in parts pink sand and a small island to which it is possible to wade through a shallow channel. Until the end of the 70s it was a closely guarded secret, a remote paradise, at least when the wind wasn't blowing a storm.
As years passed it got discovered by more and more willing to brave the bad track leading there and a few years ago the rubbish situation became catastrophic and the whole place was a dump.
Nowadays, with a better infrastructure this has been partly remedied but do not expect peace and quiet anymore: the road has been improved and many people visit every day by rented car and tour buses. There is also a daily boat service from Paleochora. The beach is adorned with the ubiquitous umbrellas and sunbeds.

Five kilometres before reaching Elafonisi you pass the monastery of Chrissoskalitissa (the golden step), built on a rock overlooking the sea. The legend has it that one of the 90 steps leading up to the monastery is made of pure gold. This can only be seen by those who are pure of spirit.
The monastery only has one monk and one nun (family related) living there, an unusual solution to get around the lack of "young blood". The history of this monastery is a little vague: it is shown on Venetian maps (with the name Gounoskalitissa) but almost nothing is known of it. It was abandoned during the Turkish occupation and remained empty until the middle of the 19th century when a monk from the region of Sfakia settled there.

The gorge of Agia Irini is the best known gorge of the region. It may not be as fashionable as the Samaria gorge but is far less crowded and not as demanding.
The gorge is 7 km long, full of oleander and plane trees and is redolent with the odours of rosemary, sage and thyme. The entrance to the gorge is located between the villages of Agia Irini and Epanohori, on the road to Sougia. There are a number of rest stops along the way and many tranquil places to sit and admire the scenery. The complete walk through the gorge of Agia Irini and all the way down to Sougia takes 3 to 4 hours.

Paleochora was discovered by hippies back in the 60s and from then on its days as a tranquil fishing village were numbered. As more visitors came, more rooms were built, more cafés and restaurants opened. The advent of greenhouse farming in the area also brought a certain amount of wealth and employment.
Today, Paleochora is a busy holiday resort but it still caters mainly to individual holiday makers and the place retains a certain laid back feel and local character. Paleochora is also one of the few beach resorts in western Crete which does not go into total hibernation in winter.
The little town lies on a narrow peninsula with a long, curving sandy beach exposed to the wind on one side and a sheltered pebble beach on the other.
On summer evenings the main streets are closed to traffic and the tavernas move onto the road. The most picturesque part of Paleochora are the narrow streets huddled around the castle.
There are quite a few easy walks along the coast and in the hills that can be undertaken from Paleochora.

Sougia was discovered in the early 70's and became a favourite haunt of German and Austrian travellers. It is surprising that Sougia hasn't yet been taken over by the package tour crowd. With a wide curve of sand and pebble beach and a shady tree lined coastal road, Sougia's tranquillity has been preserved only because it lies at the end of a narrow, twisting road that would deter most tour buses. In the last few years it has however become a much-liked weekend destination for the inhabitants of Chania and it can get busy in the summer on Sunday. The beach however is long enough to retain an uncrowded feel at all times and its eastern end remains staunchly nudist.

There is a very informative web site about Sougia at www.sougia.info