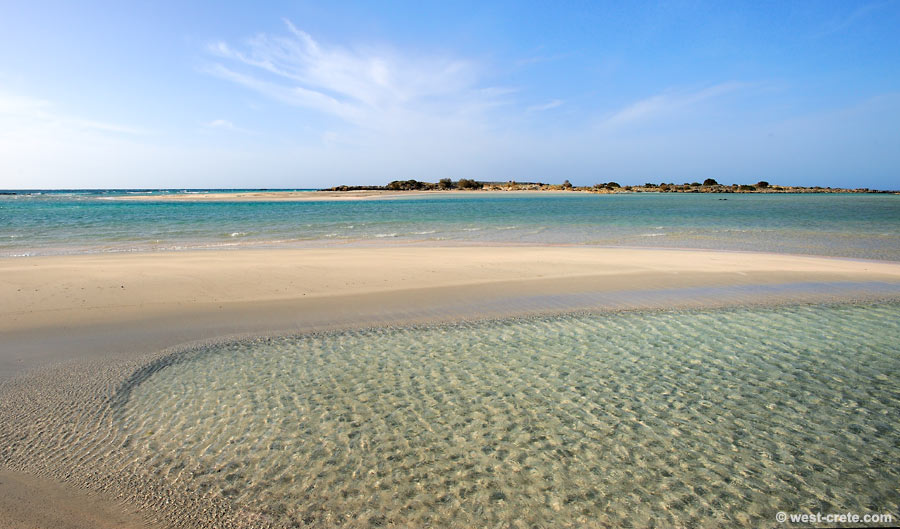 Elafonisi, in the South-West of Crete has become a very popular destination for day trippers who flood to this corner of paradise by car, bus or boat. Its main attraction to most tourists is the unique feeling of being in a South Seas lagoon whilst having a Mediterranean holiday.

Unfortunately the popularity of Elafonisi has removed another main factor in attraction: the wild beauty of a deserted place. In summer you will find sun beds tightly packed along the beach and thousands of people enjoying the warm waters of the lagoon.

But it is still possible to get a taste of the wilderness: walk away from where the road ends, wade across the lagoon to the island (a protected nature reserve where no sun beds are allowed). Keep walking a little along the beach and look for a quiet cove. You may not be completely alone but you will have your peace.

Another solution to experience Elafonisi is of course to visit out of season. From late October to April it will probably look as pristine as in the photo above.

What you will find in Elafonisi

The main attraction of Elafonisi is the beautiful sandy beaches fringed with pink coral sand and the crystal clear waters of the sea and the lagoon. As it is located at a remote corner of Crete you also get a sense of wilderness, being far from everything. Unfortunately if you happen to visit at a busy time you won't be far from the hundreds (if not thousands) of people who had the same idea as you that day.
But do not despair... you can still escape the crowds by walking a little away from them. Most people are too lazy or unadventurous to venture far from where they parked their car.

Walk to the island! Wade through the knee deep water of the lagoon (sometimes the channel closes and you can walk all the way without having to get your feet wet) and head to the island. There are many small beaches on the South side and the further you walk the quieter it gets. The water is generally quite shallow and safe for children.
At the western end of the island there is a promontory with a small lighthouse, and chapel (of very little interest). Being a little higher up you can get some nice views of the whole area.

Coral sand - The pink and red sand that gets deposited along the water's edge is produced by the large amount of red and pink shells that get ground up by sea action. A lot of people are disappointed because they have seen extremely overprocessed photos of the pink beaches on the internet. In real life it never looks deep pink, more a tinge of pink in the sand (look at the photos at the bottom of this page). Sometimes it is hardly visible, not so much because people steal it (I have seen this mentioned a lot in internet comments) but because it is also dependent on currents and waves. Additionally if so many people walk along the beach this will disturb the coral sand deposited on the surface as well.

Plant life and flowers - Elafonisi is a protected area (Natura 2000 site as well as a Micro-Reserve for the protection and study of Androcymbium rechingeri). The small island is home to 110 plant species and is a dream for anyone interested in botany. Most notable are Sea daffodils, Androcymbium rechingeri, Marram grass and endemic Juniper trees.

Amenities for visitors - As you get to Elafonisi by road you will need to drive a short stretch of dirt road down to the sea. This is OK for most cars, just drive slow. There is ample free parking space near the beach.
The main beach is more or less taken over by sun beds and umbrellas during the tourist season. There are a couple of beach bars providing drinks and snacks but it's very limited.. There are toilets (for which you need to pay), showers and a few changing cabins are also located nearby.

On the island itself, there is nothing of that sort but the Juniper trees have been roped off (to prevent being disturbed by visitors) and some paths have been marked (especially a path leading to the western tip of the island and the lighthouse that follows close to the rocky north shore) to discourage people wandering about and trampling all over plants.

Most people seem to go to Elafonisi by hire car. The most direct road from the North coast passes through Topolia and Elos. It is a fairly narrow winding road so don't expect to be driving fast (you'll need at least 90 minutes from Chania, an hour from Kissamos). There is also another route that runs along and above the West coast of Crete. Beautiful views but it takes quite a bit longer. If you don't want to return by the Elos route you could choose this as a return route.

You can also drive from Paleochora but the most direct route is in part over a dirt road and not advisable unless you have a 4x4 car. The longer asphalted route which also passes through Elos takes a little over an hour.

If you don't want to drive there are a few public buses from Chania during the tourist season. Check the time-table here (you won't see the connection when it is not running i.e. if you look at the time-table out of season).

A number of organized bus excursions also take place from resorts on the North coast of Crete. Check at your hotel or resort what is on offer.

Finally you can also go by boat from Paleochora. The boat leaves Paleochora at 10.00 in the morning and returns at around 16.00 from Elafonisi. The trip takes around an hour, is more relaxing than driving and gives you good views of the coast. The boat will not run if sea conditions are bad so it is best to check locally the evening before.

There are not many places to stay in Elafonisi or nearby so make sure that you reserve a room if you want to be sure of finding something.
Most visitors will come on day trips. This means that if you stay nearby you will have peace and quiet in the evening hours once day trippers have left.

Elafonisi is a protected area (Natura 2000 site as well as a Micro-Reserve for the protection and study of Androcymbium rechingeri) and camping is not allowed (and not tolerated either).

Elafonisi is quite exposed to winds from all directions. Strong wind and fine sand do not make a good combination so it is best to avoid going to Elafonisi on very windy days. The nearest weather station to check real time conditions is at nearby Paleochora.

Summer months are the busiest months, especially in August. Spring (April and May) is quieter but the sea is still a little cold. Things quieten down considerably from early October and the sea is still very warm.
An even better time to visit Elafonisi would be after the end of the tourist season (first days in November) where you will have the place more or less to yourself and the sea won't be cold yet.

If you want to see the large population of Sea Daffodils flower pay a visit in late August and September and make sure that you cross to the island where they are far more plentiful. The very rare Androcymbium rechingeri flowers from December to late January on the elevated part of the island.

Avoid very hot days as there is almost no shade on the island (and umbrellas are not allowed so as not to disturb the root system of the plants). Of course on a very hot day you can stick to the mainland beach and use the umbrellas and sun beds that are provided there.

Kedrodasos beach - If you find Elafonisi too crowded for your taste walk for about 20 minutes (more or less along the coast, you'll find some paths) towards the East and you will get to much quieter beaches with a beautiful Juniper forest.

Snorkelling - Elafonisi is a very good place for snorkelling: the water is very clear and quite shallow (less than 10m deep) for a long way

Kite surfing - Frequent high winds and the existence of a lagoon protected from waves make it a good place for kite surfing. I am not sure that this would take place in summer when there are too many people around but in winter local kite surfers will drive down from the North coast to practice their skills. Good fun to watch.

Rules and regulations in Elafonisi - As a protected nature reserve the area of Elafonisi is subject to a number of rules. The main ones are no camping, no fires, don't collect sand or flowers and not to use umbrellas on the island. For a full set of rules click on the link above.

Shipwreck of the Imperatrix - The sea around Elafonisi is quite treacherous and the area has had its share of shipwrecks, the most famous one was the Austro Lloyd Steam Ship Imperatrix which ran aground off the island in 1907. Not much is left of it unless you are willing to go and dive. A lighthouse was built after the wreck (and replaced with a more modern one after WWII). The chapel (as well as a shrine) located near the lighthouse are dedicated to Agios Nikolaos (St. Nicholas), patron saint of sailors.

Map of the area


View Elafonisi in a larger map