The district of Sfakia, South Crete

The district of Sfakia is the largest one in the prefecture of Chania, but consisting in large part of mountains it is sparsely populated. Sfakia is famous throughout Greece as one of the most traditional regions of Crete and for its magnificent nature, contrasting the high mountains, the plateaux of Askyfou and Anopolis as well as the wild scenic coast of the Libyan sea. There is plenty to explore in the region. Below are the best known places

The capital of the Sfakia region is the small village of Hora Sfakion (or Chora Sfakion). It has a population of less than 400. From there you can also take ferry boats along the coast of West Crete to explore areas which are not accessible by road.

The small village of Agia Roumeli is mainly known as the place where people arrive after hiking through the gorge of Samaria but has much more to offer than just a refreshment stop. Set in a dramatic landscape Agia Roumeli also has some great beaches which are almost deserted and whilst being filled with hikers in the afternoon, as soon as the last boat has left in the evening the village becomes very quiet again.
For more information take a look at www.agiaroumeli.com 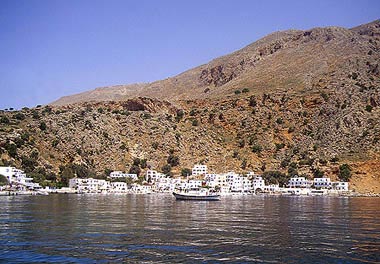 The main attraction of Loutro is that it can only be reached by boat (regular connections from Hora Sfakion) or on foot. Loutro is also well protected from bad weather and is an ideal place to spend a few quiet days. Having said this, Loutro can become crowded and cramped in the summer months. The small pebble beach is right in the village and many people chose to walk an hour to the beautiful Sweet Water beach, east of Loutro, for more privacy.
Loutro is also a good base to explore the region on foot.

Located between the sea and the southern slopes of the White Mountains at an altitude of 600 - 700m, the plateau of Anopolis can be regarded as the heartland of the Sfakia region. A fertile plain, it has been inhabited since Neolithic times and its natural setting has protected it from outside influences, particularly from the Turkish occupants.
The most notable place of interest is the abandoned village of Aradena which is set on the edge of the gorge of Aradena and offers superb examples of traditional Cretan architecture.

Frangokastello, located about 12 km to the east of Hora Sfakion, used to consist only of the 14th century Venetian fortress and the ruins of a monastery. The nice sandy beach has since attracted considerable tourist developments but Frangokastello remains a sleepy little resort.

The plateau of Askyfou is located at an altitude of 700m about half way between the north and south coast, on the road to Hora Sfakion. It consists of a few small villages and a fertile plain where wheat, potatoes and vine are grown. There is also a Turkish fortress set up on a hill. 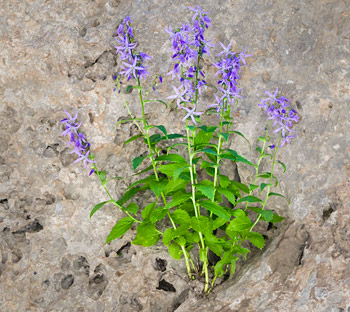