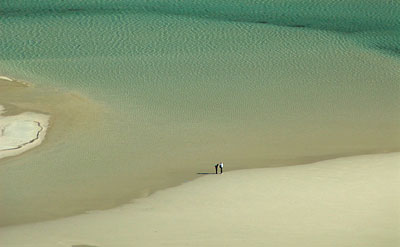 The coastline of Crete is a little over 1000 km in length and a good proportion of it consists of beaches.

With several hundreds kilometers of beaches to choose from you will find almost everything to suit your particular taste somewhere on the island: long sandy beaches with all tourist amenities, secluded coves, coarse pebble beaches, fine pebble beaches, dark sand, red sand, light sand and more.

The following pages will take you to the beaches of West Crete.

For ease of use, the beaches are listed starting at Rethymnon and moving anticlockwise (so westwards along the north coast of Crete, then southwards along the west coast, then eastwards on the south coast, all the way to Agios Pavlos (that's the one close to Agia Galini).

Generally the water on the north coast is a touch warmer than on the south coast but not as clear (or clean). The water on the south coast (Libyan sea) is slightly colder because the mountains drop steeply into the sea and there are a number of cold underground springs emerging into the sea. The sea is very clear, apparently due to a high concentration of limestone in the water.

Nudism is illegal in Greece (except in a few designated areas) but tolerated in a number of places. The situation might change suddenly (often when a beach canteen is built a "No nudism" sign will appear). Topless sunbathing is fine, unless the beach is right in a village, like in Loutro for example.

The very long beach of Rethymnon is nowadays lined by hotels. It gets a little quieter as you go towards the east.

The beach has nice sand and is 9 km long. Many hotels have been built on it but the eastern end is still pretty quiet. Be careful when you swim, the currents can be strong. If you get carried away, don't panic, the current moves mostly parallel to the beach and not out to sea . Watch children closely. Drowning accidents happen every year!

Nice sandy beach, can be crowded. The sand is a bit coarse, a good thing when there is wind as it doesn't fly so easily. Kiani Akti to the West of the village is very quiet

On Akrotiri, is well-liked by the inhabitants of Chania and gets very crowded at weekends. The sandy beach is nice, the water quite warm and very shallow. Brilliant beach for children.

Stavros is a small village at the North of Akrotiri. The sandy cove had its moment of fame when the beach scenes of Alexis Zorbas were filmed here. Very lovely little cove and fairly crowded at weekends. There is also a nice long sandy beach a little to the West. Much quieter but getting into the water is a little tricky in places because of rocks.

Also on Akrotiri. Very nice sand, can be crowded in summer and at weekends. Shallow water so ideal for children.

There is a town beach in Chania which can get fairly crowded . Keep walking along the beach for about 15 minutes and you get to Chryssi Akti

Nice sandy beach, can get crowded. Shallow so the water is warm and it is safe for children.

Just a little way along, it consists of three small beaches. It can get crowded, shallow water (the third one is very shallow).

From then on, it becomes an interminable sandy beach pretty much all the way to Maleme. Crowded, lined by hotels and apartments. Many visitors obviously like it, otherwise they wouldn't all come here. A word of warning: beware of currents, especially in Agia Marina. The small island of Agios Theodoron seems to strengthen them. Every year a few people drown (not rarely because they went for a swim drunk: don't!)

Long bay, a pebble beach. Not that great but quiet.

At the tip of the peninsula of Gramvoussa. Now you can drive almost all the way on an unsurfaced road, then follow a good path down to this incredible spot. A lagoon with "South Seas" colours, very shallow waters, few people. Sounds like paradise and it was. Now the bad news: the beach is now very crowded (during the middle of the day) in the tourist season because of a number of boat excursions that go there from Kissamos as well as hundreds of cars that drive to it.

The beach is quite long and well-known but does not get really crowded. Don't bother going to Falasarna if there is a strong west wind, it gets unpleasant. Very clean, deep blue water that is often colder than elsewhere.

Before it was "discovered" a little over 30 years ago, Elafonisi was THE secret paradise beach of western Crete. With a small island you can wade to, red coral sand on the edge of the beach and nobody far and wide. Nowadays, bus tours amd hundreds of hire cars come from the North coast and a daily boat service brings visitors from Paleochora. The magic has gone, the rubbish has come (at least it gets taken away nowadays). It is still worth a visit but don't go when the wind is strong.

About 8 km west of Paleochora. It used to be deserted until a few years ago and is still pretty quiet.

A small peninsula about 4 km west of Paleochora, one side with a sandy beach, the other with pebbles.

Two beaches: the long sandy beach is very nice and can get crowded. Nudism is OK on part of the beach. If you prefer pebbles or the West wind blows too much for your taste go to the eastern bay where a long pebble beach runs for about 3 km. Have something to lie on, the pebbles are quite large.

An hour's walk from Paleochora, fine pebble beach. Nudism OK in parts of the beach. Now that a dirt road leading to it has been built it can get busy, especially at weekends. Very clear and cold water.

Sougia has a long pebble beach. A few years ago it became the "in" weekend spot for Chania inhabitants, therefore avoid Sundays in midsummer. The beach is 1200 meters long so that it never feels crowded. The pebbles are fine enough not to make lying on them uncomfortable at all and it is one of the very few beaches which doesn't have sun beds and umbrellas on it. Nudism is usual towards the eastern end of the beach. More on this beach here.

The beach is quite nice, varying between fine and coarse pebbles. The part nearest to the village gets crowded during the afternoon with Samaria walkers wanting to cool off but walk 200 meters and you are almost alone. In the morning and once the last ferryboat leaves it is almost deserted.

Still idyllic and quiet because you must walk (a little over an hour from Agia Roumeli, 2 hours from Agios Ioannis, 3-4 hours from Loutro) or come with your boat. If you need shade, there is a pine forest just above the beach.

A tiny beach, an hour walking from Loutro, at the entrance of the gorge of Aradena. It is called Marmara (Marble Beach) because of the smooth white rocks next to the beach. An insider tip some years back but no more: a boat brings people from Loutro every morning and being a small beach it can quickly feel crowded.

The pebble beach of Loutro is right in the village (topless sunbathing is not allowed) and very narrow. The water is really nice but the beach gets far too crowded.

Another former insider tip. It is still a very spectacular and quiet beach, called "Sweet Water beach" because if you dig a hole on the beach, sweet water will seep into it from the ground. Nudism and camping are OK. Quite a few people camp there (it's a good place as you have access to water). Don't attempt to climb up the cliffs, they are unstable and some people have gotten themselves killed doing it. You can walk to Glyka Nera from Loutro or from Sfakia in about an hour. There is also a boat service to the beach from Loutro and Hora Sfakion in the morning and afternoon.

The beach is in the village and quiet pleasant although it can be a little crowded. A little further east of the village are two small beaches. The furthest one, Filaki, is the only official nudist beach in Crete.

Famous for its ruined Venetian castle, Frangokastello has become very built-up. The sandy beach (below the castle) is extremely shallow and perfect if you have small children. There is a beautiful quiet sandy beach to the east (Pachia Ammos) where nudism is generally OK at its eastern end.

Three quiet and pleasant beaches. It gets busy in August because many Greek holiday makers go there.

A long bay, a mix of pebbles and sand. It doesn't get very crowded. The sea is fairly safe for swimming, unless it gets very windy (which it often does in Plakias). Nudism OK at the east end of the beach.

Nice sandy beach that has been a little spoilt by several large, developments.

A river flows into the sea. Along the river is a palm trees forest, highly unusual on Crete and worth a visit. But it can get crowded.

A very long beach leading all the way to Agios Pavlos. As yet fairly undiscovered.

Very pretty little bay. It was still very quiet a few years ago. If you want absolute peace, go to the long beach to the west. It goes all the way to Triopetra. 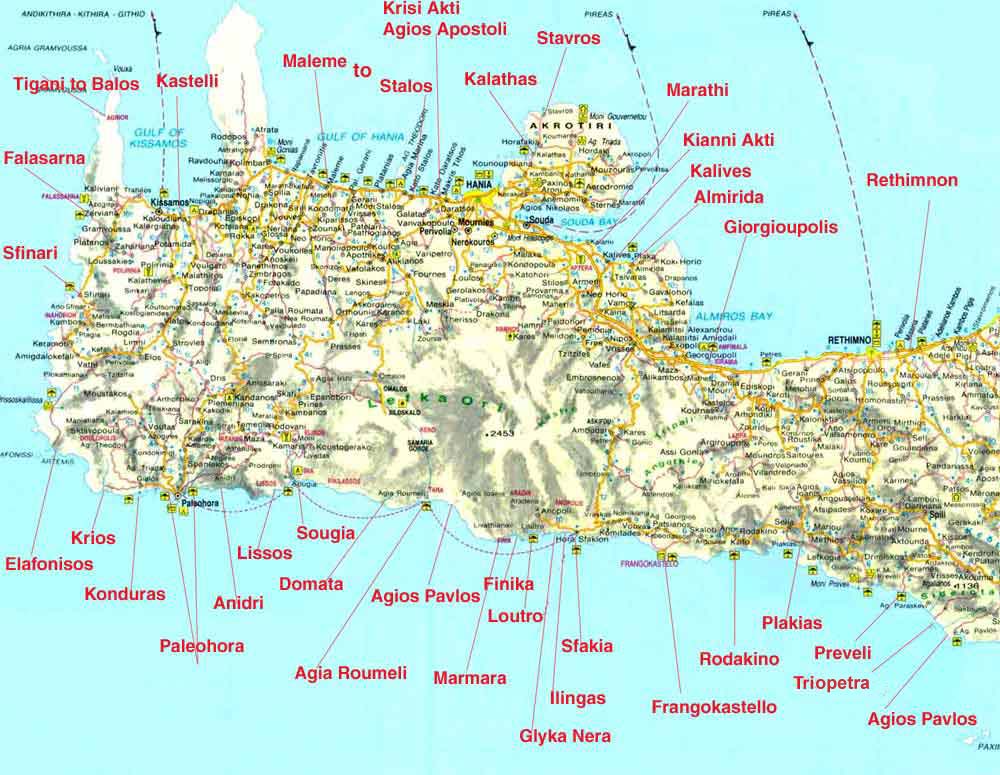 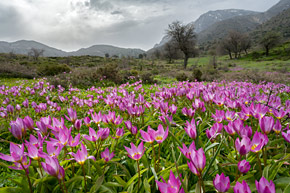