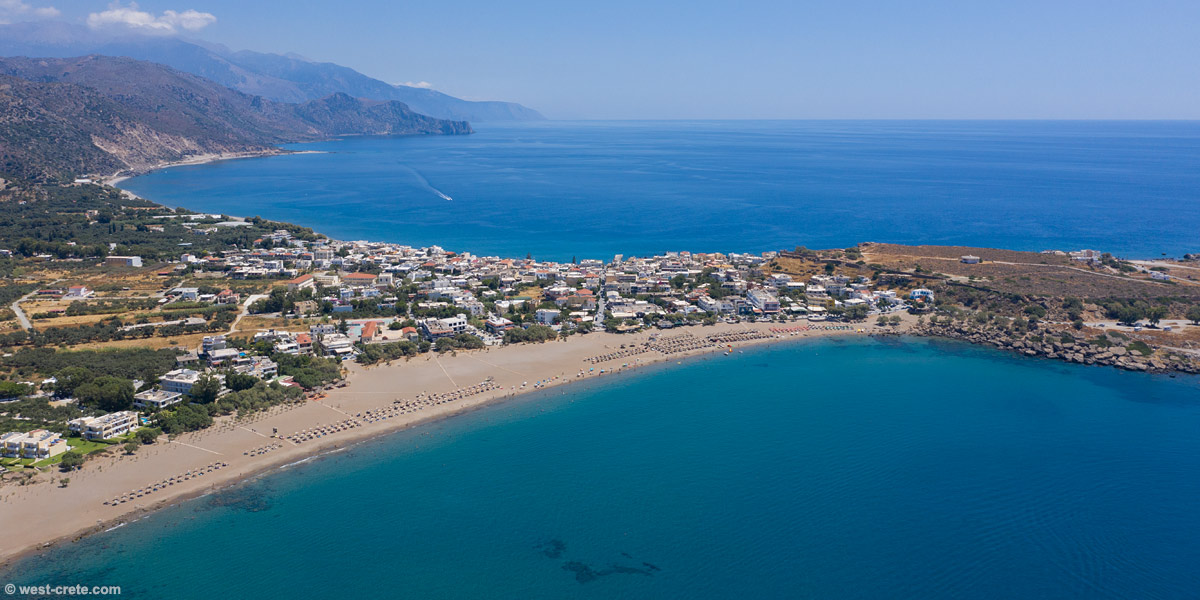 Paleochora is a large village which became popular many years ago because of its beautiful beaches. There are many to choose from, depending on whether you prefer sand or pebbles, look for peace and quiet or maybe because one side of the peninsula is too windy on a specific day.

Type of beach: there are several beaches in and near Paleochora ranging from fine sand to large pebbles.

Size of beach: the main sandy beach in town is 1 km. The pebble beach to the East of the village runs for about 3 km. Gialiskari (Anidri beach), further to the East has two beaches (pebbles / coarse sand) with a total length of 600 m.
There are many small coves to the West of town. Then by Konduras, Grammeno peninsula has a sandy beach on one side and pebbles on the other, respectively 400 and 700 m. Further to the West you get to Krios beach (pebbles, 500 m ) so you are really spoilt for choice.

Crowds: the sandy beach can get crowded but never feels cramped because of its size. Other beaches are rarely too busy even in August.

Winds: Paleochora is often windy but by changing beach you can generally get out of strong wind.

Nude beach: the eastern end of Anidri beach and the western end of Paleochora's sandy beach are clothing optional.

Sunbeds and umbrellas on all the beaches

Safe for children - generally no currents. Not many waves except on the West facing beaches. Water drops quite quickly in some areas

Life guard - only on the main sandy beach of Paleochora

Good road access from the North coast of the island and frequent public bus service to Chania. Also connected to other South coast villages by ferryboat.

Every beach as at least a café / snack bar and Paleochora has a huge choice of tavernas, cafés and bars.

Best places to stay near Paleochora