Kydonia: the district of Chania

The district of Kydonia comprises the city of Chania (also written as Hania or Xania), with about 60.000 inhabitants the second largest city in Crete. The district spreads west of Chania and south to the foothills of the White Mountains and also comprises the peninsula of Akrotiri. 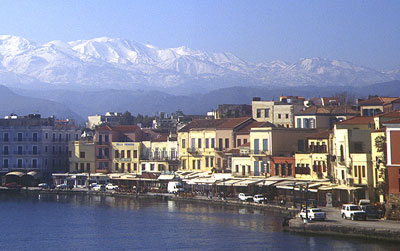 Chania is now a sprawling modern city boasting traffic jams and parking problems. It is also Crete's most picturesque city with a wealth of buildings from its former Turkish and Venetians occupiers, scattered throughout the narrow streets of its Old Town. This old town is contained by massive Venetian fortification walls and the water front where a Venetian lighthouse and large vaulted arsenals can be seen.
Chania is also a good place to shop, particularly for jewellery and leather items.

The coast west of Chania

The coast to the west of Chania has a long sandy beach stretching almost all the way to the peninsula of Rodopou. This has encouraged a massive touristic development and the whole coast is a succession of hotels, apartments, restaurants, shops and other tourist amenities.
As soon as you leave the coast and turn inland, you will find yourself in a lush countryside where the main crop is citrus fruit. The area is particularly beautiful in the early spring with the snowy backdrop of the White Mountains.

From May to October, thousand of tourists cross the plateau of Omalos on their way to the gorge of Samaria. The plateau of Omalos is also worth the beautiful drive along a winding mountain road on its own merits. Located at an altitude of about 1100m it is a circular plain completely surrounded by mountains and used for summer crops as well as spring and autumn pastures. You get good mountain views as well as a bird's eye view into the gorge of Samaria, far below.
In the winter, the plateau of Omalos is a popular weekend excursion goal for the inhabitants of Chania who want to experience the snow.