A drive through the orange growing region of western Crete then up the northern hills of the White Mountains to the high plateau of Omalos and the entrance of the famous gorge of Samaria.  Return via another hilly route.

All the images will enlarge when clicked

Oranges have been grown in Crete since Venetian times but their cultivation has increased a lot in the past few decades to now cover a lot of the warm valley bottoms in north-west Crete.

The village of Lakki

Lakki is the last village on the way to Omalos. There are a few cafés and a couple of small tavernas and you have very nice mountain views. Most of the villagers are shepherds.

The road into the mountains

Coming out of Lakki (or Laki, there seem to be two forms for writing the name) the road carries on and up, eventually leaving the olive groves and coming to sub-alpine vegetation of cypress and oak trees. You might also notice that the vegetation is "going back in time": because of the increased altitude plants that have already flowered further down are only starting at higher levels.

On clear days this stretch of the road will give you some amazing views of the north coast, all the way from the peninsula of Akrotiri and the city of Chania to the peninsulas of Rodopou and Gramvoussa.
If you want to stop to enjoy the views or take some photos make sure that you do so in a safe place.

The plateau of Omalos is the largest and most famous of the high plateaus of western Crete. It is roughly circular and flat at an altitude of around 1100m. Filled with fertile alluvial material it was (and still is to some extent) used to grow vegetables, fruit and cereals of a more temperate nature such as apples or potatoes that would not grow well in the warm Cretan climate at sea level. The plateau is also important as a halfway station for moving sheep from lower winter pastures to the Madhares (the higher parts of the White Mountains) in the spring and back in the autumn. Because of the cold and the huge amount of snow falling in the winter there were no villages or permanent habitations on the plateau, only summer houses used by the inhabitants of Lakki and Agia Irini.

Nowadays of course there is a road and electricity and a few families live there all year around to run a few hotels and tavernas. These started to cater for tourists travelling through in order to walk the gorge of Samaria but in the last 10 years a good amount of local winter tourism has started to develop and the plateau is a very popular winter weekend destination for the inhabitants of the coastal towns to go take a walk in the snow (and a long meal in one of the good restaurants afterwards). For the more adventurous it is also a good starting point for longer walks towards Kallergi and beyond or for the summits of Gingilos and Psilafi.

Historically the plateau of Omalos was also used as a refuge during uprisings against the Turks and you can still see the 'castle' of the famous chieftain Hadzimihalis Giannaris, one of the great rebel leaders of the 19th century near the northern entrance of the plateau, located on a small promontory next to the chapel of Agios Pandeleimon (which was built in gratitude for his deliverance from a Turkish prison where he had prayed to the saint to intervene on his behalf). 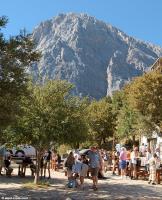 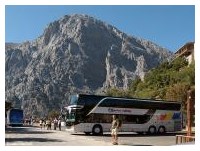 At the southern end of the plateau of Omalos the road rises a little to an altitude of 1230 m and you get to the rim of the plateau where it drops precipitously into the gorge of Samaria. The area is called Xyloskalo. The name Xyloskalo means "wooden staircase" (or ladder) and originates in the fact that in the past, the inhabitants of the gorge had built a sort of staircase out of pieces of wood and tree-trunks in order to get in and out of the gorge. This is because the entrance of the gorge is a very steep drop which would otherwise have had to be climbed.

Because of the numerous visitors coming to walk through the gorge of Samaria between May and October (roughly speaking around a quarter million per year) there is quite an infrastructure at the entrance: a large car park for buses and cars, a café and snack bar with toilets and souvenirs, a visitors centre (which I never saw open) as well as a National Park wardens post and ticket booth. It can certainly be a busy place in the morning so if you want to enjoy the views but are looking for more peace and quiet it might be a good idea to drive the last 200m of the road up (or walk from the car park) and go to the café located there. Its terrace offers stunning views of the Samaria gorge and the surrounding mountains.

In winter the atmosphere is very different: during the week you will generally see no one in the area (apart from a warden manning the entrance post of the park) and at the weekend there will be a few visitors who come for a walk or to enjoy the snow and the café above will generally be open. 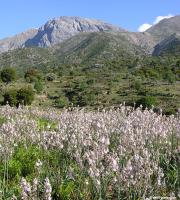 A little higher and close to melting snow fields you will find the endemic Crocus sieberi and Scilla nana (often hiding in or near Berberis bushes).

Safety on the road 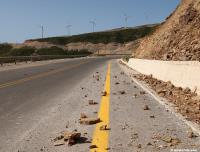 The road leading to Omalos, especially after Lakki, is a mountain road and there are several possible dangers to watch for:

- From early May to late October many tour buses take tourists up to the entrance of the Samaria gorge. They will return (empty) by the same route which means that if you drive up in the morning you will encounter quite a few buses coming down the mountain. Watch how you drive into curves!

- In winter and early spring you might encounter frost and snow. After a snowfall the road will be re-opened by snow ploughs but you might need snow chains. If the conditions are really bad the road will generally be closed by the police or they may check and only allow 4x4 vehicles equipped with chains. What is more dangerous are days where the road is open but with snow along the side of the road (it can stay a long time if huge quantities of snow have been ploughed to the sides). It may be melting during the day but could well freeze at night and some curves and parts of the road that don't get the sun (in the winter) will be covered in ice in the morning.

- If you drive at night in winter time you will often encounter fog. As the road edges are not that well marked it can make driving really difficult.

- At night (at any time of the year) goats like to use the road as a smooth place to sleep on. Do not drive fast because you will often see them at the very last minute, they don't have lights on!

- After heavy rain there may be a lot of stones falling on the road. This is more common where the road has been widened recently (for example below the pass of Petras Seli, coming back down on the road that comes from Sougia) because there is no new vegetation to hold the cliffs. 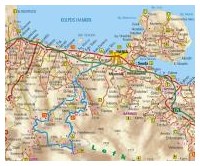 The route starts from the West of Chania. If you are on the National Road you will want to exit at the westernmost Chania exit. You will see a sign to Omalos. If you are coming from the town of Chania drive out towards the West and follow the turn to Omalos (again clearly signposted) at Kladissos bridge. From there the road heads south through what could be described as Chania suburbia, becoming more agricultural as you get to Agia and beyond.

After about 8 km you get to a junction with loads of road signs (see image). If you turn right you'll be heading for Sougia (via Alikianos). The route we describe in this page will come back this way. For now head straight towards Fournes and Omalos. Drive along orange groves then through Fournes past a large church on the left hand side and take a sharp turn right (sign to Lakki and Omalos).

Follow this road. It will shortly start ascending through olive groves and after 10 km from Fournes you will reach the picturesque village of Lakki. Drive though the village (there are a few turns but there is really only one road so you can't get lost).

After 12km you clear a small pass and descend to the plateau of Omalos. The road is heading straight south.

After about 1 km you get to the first two hotels / tavernas. On your left 'To Exari' and on your right 'Neos Omalos'. Both are open all year around and offer excellent traditional food and comfortable rooms. Carry on for another 3 km (passing a fork to your right with a sign to Sougia) and you get to the end of the road: Xyloskalo, which is also the entrance of the gorge of Samaria. Actually, you can carry on and up for another 200m where the road ends in front of a large stone building which is a café and taverna with great views of the Samaria gorge and the mountain of Gingilos.

To return retrace your route for just over 1 km to the turn off to Sougia (left when you come from Xyloskalo). The road now follows the southern edge of the plateau of Omalos. Past a small pond (dried out in mid summer, possibly frozen in winter) and a few stone houses. Shortly before the pond the road divides and you can drive both ways but it is probably best to keep to the left. After another km you arrive at the south-west rim of the plateau and a good wide road ascends slightly before descending and gently meandering through forest to Petras Seli (just over 10 km after leaving the plateau of Omalos).

You will notice a windfarm with 18 wind turbines built in 2007. Petras Seli is at the watershed between the North and the South of the island and is often a windy place. To the North you will have good views of the North coast and Chania. To the South there are nice views down the valley of Agia Irini towards Sougia and the Lybian sea.

You can now return to Chania (38 km) following a good road which will take you first through some small chestnut forests and then olive groves before getting back to (almost) sea level and rejoining the orange groves. Past Alikianos you cross a narrow bridge and get back to the junction with the road to Omalos. The National Road is another 8km away.