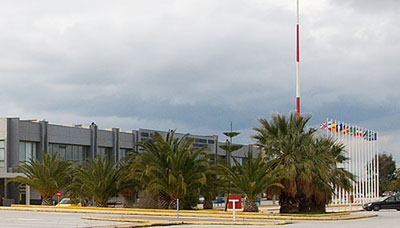 There is a public bus service between the city of Chania and the airport.
A taxi stand is located right in front of the airport and there is generally no waiting time to get a taxi. It will cost about 25 Euro (2020 prices) to get to the airport from the city centre or vice versa.

If you come by car and want to park you can either use the car park right in front of the airport (a little more expensive) or park at one of the two car parks located just before the entrance of the airport. They are cheaper for long term parking and have a shuttle to the airport (or you could also walk, it's only around 200m away)

Chania airport is not as busy as Heraklion airport but it still handles about 2 million passengers a year.

Domestic flights (to Athens and a few to Thessaloniki) run throughout the year (there are about 6 to 10 Athens flights a day run by Olympic Airlines and Aegean Airlines).

Most charter flights to European destinations run from April or May to the end of October or early November.

Check-in time for domestic flights is 60 minutes but you'll get away with 30 minutes.

Check-in times for charter flights are generally 2 hours but check with your airline.

The airport was renovated and substantially enlarged in 2017.

There are no hotels really close to the airport. You can search for hotels within a wider radius here.