If you cannot get hold of the books below before your journey, don't worry, there are a few newsagents in Chania and Rethymnon that have a good selection of books (and maps) about Crete. They also stock various Greek editions of books and maps which might be difficult to find in other countries.

For more information on anything to do with Greek books and books about Greece, go to the web site of the Hellenic Bookservice, a specialist bookshop in London. If you can't find it there (or at least get information) you won't anywhere else! 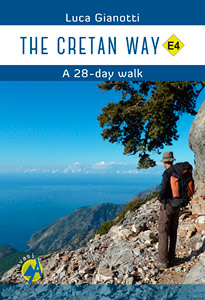 The Cretan Way – A 28-day walk by Luca Gianotti

This 180 pages book is a new and fresh approach to walking the E4, a long distance path that traverses Crete. Whether you want to walk for a few days or several weeks this is well worth reading (and taking with you),

The book is available at Amazon  and can of course be bought in all good bookshops in Crete. 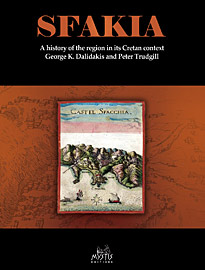 On the rugged and remote coast of southwest Crete, the fiercely proud and independent people of Sfakia have survived millennia of invasions by many of the world’s most aggressive and dominant civilisations. This book describes the lives of the indomitable and warrior-like Sfakian people as they struggled to thrive among and against the major Empires of Europe – Hellenic, Roman, Arab, Byzantine, Venetian and Ottoman – and to oppose the German occupation during World War II. With a rich detailing of the oral history of the region and of information gleaned from years of meticulous archival research, this book captures the spirit of the Sfakian people who have mastered its deep gorges, high plateaus and awe-inspiring mountains.

This comprehensive historical account is written for people with an interest in Sfakia and its turbulent past, and in particular for Sfakians and Cretans of the diaspora who are not able to access Greek language history books and research that deals with this subject. 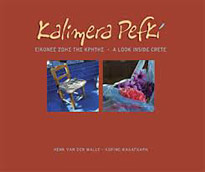 Kalimera Pefki (by Corinne Falagaris-Vogelzang with photos by Henk van der Walle) a wonderful journey – in twelve stories – through a valley on the magical island of Crete. Touching, hilarious and above all surprising photos and narratives open doors which otherwise would have remained closed to the reader.
Meet the wise mayor, the caring widow, five little girls splashing about in a baptismal font and the wistful bus driver. And follow the moving story of an eagle and the birth of an angel. Read, watch and taste the real Cretan life. It will touch your heart and stay with you forever.

In Sfakiá by Peter Trudgill - Quoted from the back cover of the book " In Sfakiá is an affectionate, personal account of the historic and remote Cretan region of Sfakiá and its main village, Chóra Sfakíon, as encountered by the author and his wife starting in the late 1970s. The landscape is rugged, as are the Sfakián people, who are renowned for their heroism, fierceness, dignity and independence -- and even today they remain "hospitable to the point of insanity."

We follow the couple as they become increasingly engaged with the local people, language, customs, landscape, history and legends, tragedies and triumphs of the region; we learn of their personal adventures and observe their gradually increasing understanding of Village life. "

I found that In Sfakiá managed to put across the essence of Sfakia together with a lot of information in a pleasant narrative way. It also avoids clichés which is no mean feat when you talk about Sfakia. No matter how much you think you know about this most traditional corner of Greece, you'll learn something more in this book.

The Making of the Cretan Landscape

by Oliver Rackham and Jennifer Moody (Manchester University Press, ISBN 0 7190 3647 X) is an absolute must if you want to know more about the landscape of the Cretan archipelago in all its extent and how it was formed in the past millennia not only by natural causes but also human influences. Both authors have studied many aspects of Crete and the surrounding islands, like the trees and plants, people and the settlements, the buildings, the animals, shepherding, etc. They reveal a different vision of the history and the present of Crete, compared to what can be found in most books.
They also have a web site about their studies at http://sphakia.classics.ox.ac.uk/

The book has been out-of-stock for some years now and will not be re-printed. It now commands very high prices. If you are interested in Crete it's still money well spent.

Throughout the ages, like all the Greek islands, Crete has suffered many geological catastrophes and upheavals, even in the near past when humans were already living on Crete. Not many easylly understandable books have been published on the geology of Crete. Of course many scientific publications reveal the near geological past of Crete, as well as the many tectonical cataclysmes and the geological evolution of Crete in the prehistory.
This book is a very interesting attempt to open the eyes of  people for the geological phenomena that are present everywhere on Crete. It points the interested reader towards many geological places of interest in 7 short trips covering the whole island.
The book also contains a glossary with explanations of many scientific geological expressions.
Field guide to the geology of Crete is a real must for readers that are interested in more than only the Cretan sun and the smell of suntan oil. It is an interesting addition to "The Making of the Cretan Landscape" by Rackham and Moody.

You can find the book for sale in good bookshops on Crete.

A Guide to Living, Working, Retiring & Buying Property in Crete by Carol Palioudakis is a practical guide covering virtually every aspect of living and working in Crete. A must if you want to stay in Crete for more than a holiday.

John Fielding & Nicholas Turland - Kew Editions is THE book you MUST HAVE if you like flowers. It's too heavy to carry around with you though. It may seem expensive at first sight but once you hold this book in your hands, you will realize that it is amazing value for money.

Nikos Kazantzakis is THE writer who comes to mind when one speaks of modern Greek literature. Born in Heraklion in 1883. His best books (set in Crete) are:

published in Greek in 1946 as 'Vios kai politia tou Alexi Zormpa'. The unnamed narrator is a scholarly, introspective writer who opens a coal mine on the fertile island of Crete. He is gradually drawn out of his ascetic shell by an elderly employee named Zorba, an ebullient man who revels in the social pleasures of eating, drinking, and dancing. The narrator's re-entry into a life of experience is completed when his new-found lover, the village widow, is ritually murdered by a jealous mob.

a superb book, set in the period of the Turkish occupation.

- also known as The Greek Passion - is the story of a Greek village under Turkish domination and how the lives of the villagers are changed - some to tragedy, some to self-fulfilment - by the roles they play in the annual drama of the Passion of Christ.

The Cretan Runner: His Story of the German Occupation

by George Psychoundakis, Patrick Leigh Fermor (Translator)
An account of the Resistance in Crete during the German occupation in World War II, written by an active participant. Psychoundakis was part of a group of Cretans who tried to keep up morale and endangered themselves by acting as intermediaries between groups of British on the island.

Crete: The Battle and the Resistance

by Antony Beevor
This book recounts the fall of Greece, the invasion of Crete by the Germans and the Resistance. The book is based on interviews with both the Allies and the Germans who took part. It gives insights into the invasion from the air and explains how Ultra intelligence played a key role. It also reveals how General Freyberg actually misinterpreted German coded messages to devastating effects.

by Stanley Moss
This is a classic account by one of the officers who took part in one of the great escapades of WWII. In 1943 W. Stanley Moss and Patrick Leigh-Fermor, both serving with Special Forces in the Middle East, decided on a plan to kidnap General Kreipe, Commander of the Sevastopol Division in Crete, and bring him back to Allied occupied Cairo. This is the story of their adventures, working with a fearsome band of partisans, as they daringly capture the General in an ambush and struggle to evade pursuing German troops in the mountainous Cretan landscape to reach their rendezvous for evacuation to safety.

A History of Crete by Theocharis Detorakis
A history of Crete up to and including the battle of Crete in 1941. A little weak on Minoan history this book is, however, excellent for all the intervening years including Roman, Arab, Venetian and Turkish Rule, autonomy and unification with Greece in 1913.
Published in Heraklion ISBN 9602207124 and can be found in good Cretan bookshops

The Aerial Atlas of Ancient Crete

Plain of Phaistos: Cycles of Social Complexity in the Mesara Region of Crete (Monumenta Archaeologica (Univ of Calif-La, Inst of Archaeology))