Crete is a very old place, with layer upon layer of civilization, and accordingly there are many ancient sites all over the island. You will not find many Minoan remains in West Crete, at the most a few walls here and there (for example in Kanevaro St. in Chania where you can see the excavations of four Minoan villas).
Roman and Hellenistic ruins are more widespread but few excavations have been conducted, meaning that most ancient sites do not offer much to see to the visitor. The following places are however worth a visit:

Situated about 55 km west of Chania, Falassarna is best known for its nice beach and very clean sea. To the north of the beach (10 minutes on foot), you can see the remains of an ancient harbour dating back to the late Minoan period. The settlement was inhabited during the Hellenistic and Roman period and was probably abandoned when the island moved upwards by several meters. The harbour is now almost 8 meters above the sea level.
There is an interesting "throne" (its function is unclear) and a sarcophagus in its vicinity. A little further to the north are the remains of a quarry (it was first thought to be a harbour basin), a round tower and the remains of houses. These are being excavated at the moment. It is also worth walking up the hill, through barely visible remains of houses. At the top there is a little platform with a lovely view. 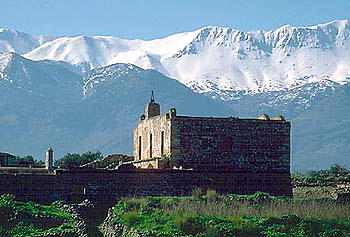 Situated above the bay of Souda, east of Chania, Aptera used to be a very large city . It was founded by the Mycenaeans (although there is evidence of late Minoan civilization), enlarged by the Dorians and was used as a settlement until the Byzantine period. The area covered by Aptera is very large and only a few excavations have taken place so far. The ruins are from different periods: enormous Roman cisterns, foundations of a Demeter temple, a Dorian temple, a Hellenistic Apollo temple are interspersed with a Byzantine cloister and a large Turkish castle.
The view from Aptera is worth the journey: to the north (from the castle) you can see the whole of the Souda bay and to the south the White Mountains.

Situated about 6 km inland from Kastelli, above the village of Polirinia, the Dorians had built a large town in the 6th century BC on top of a steep hill. Kissamos (the present day Kastelli) was its harbour. There is not much left from the ancient town - only a few walls, some graves and the ruins of temples but it is really worth a visit because of the splendid panoramic view of the whole gulf of Kissamos

Western Crete was inhabited in Minoan times but does not possess any large Minoan archaeological sites such as the palaces of Knossos, Phaestos and Zakros in central and east Crete or at least, none have been unearthed so far.
One site of interest is the Minoan necropolis of Armeni, about 9 km from Rethymnon. It was discovered by accident some decades ago and is still being excavated. Until now, about 200 underground burial chambers have been discovered. 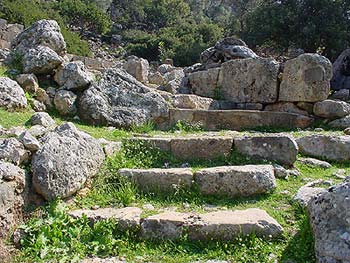 Situated about one hour by foot to the west of Sougia, Lissos was an important coastal settlement inhabited through the Hellenistic, Roman and Byzantine periods. Lissos was famous for its healing spring. There are a number of ruins to be seen, especially the small Asklepios (the Greco-Roman god of healing) temple which was famous throughout the region. You can still see a well preserved mosaic floor in it. The whole area is full of ruins, many of them hidden by the vegetation.
On the western side of the valley of Lissos are a number of Roman graves with arched ceilings.

Finally, do not forget that Chania is built upon 5000 years of civilization and that there are plenty of archaeological sites to see right in the town centre. 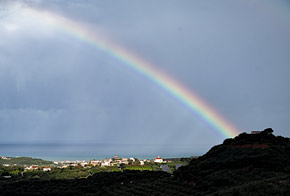