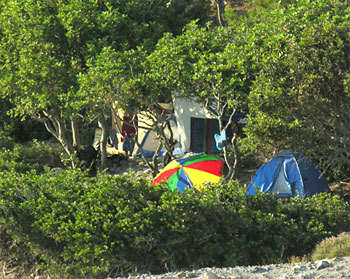 Camping is officially only allowed in campsites. In practice camping is tolerated in a lot of places (generally outside of the localities) but use discretion and sensitivity. There are occasional crack downs on unauthorized campers once in a while (usually when there are too many of them) but you are unlikely to get into trouble for breaking the law if you accept to move elsewhere.

There are only a few official campsites. Most are very simple, with lots of nature and little comfort. There will be a tavern and a bar nearby, occasionally a swimming-pool. Most camping sites are situated very close to the sea.
Many camping sites will also allow you to sleep there without tent.

We know of the following camping sites on Crete:

On the north coast, from west to east:, there are three camp sites near Kastelli, one near Chania, two east of Rethymnon, one near Heraklion, two near Chersonisos, one in Malia, one east of Agios Nikolaos.
On the south coast from east to west : two in Ierapetra, one in Matala, one in Komo, one in Agia Galini, one in Plakias, one in Paleochora.