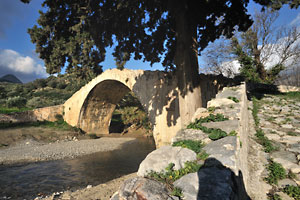 Preveli is located on the South coast of Crete roughly at the same longitude as the city of Rethymnon. If you come from the North you will follow the road to Spili and branch off around 20 km from Rethymnon following a sign to Plakias and Preveli. Heading South you pass through the Kourtaliotiko gorge , a short but impressive gorge through which flows the river Kourtaliotis which is then joined by other streams to form the Megas Potamos (literally the big river) which flows towards the sea through the palm forest of Preveli. This is one of the few rivers in Crete that flows all year around.
After the village of Asomatos turn left then 1.5km later left again. You will soon arrive at an impressive Turkish style bridge crossing the Megapotamos. It was built in 1850 for the monks of Preveli.

After the bridge the road ascends again and skirts around the ruined monastery of Kato Preveli. Unfortunately it is fenced off and you cannot visit it but you can have a good view from the road.

The road keeps ascending and turns to the West (leaving a short branch heading South to Preveli beach and the palm forest). It passes a recent monument commemorating the resistance of the monks of Preveli to the German invaders in World War II and their help in evacuating Alllied soldiers to Egypt.

Another bend in the road lets Moni Preveli appear. The monastery is a famous place for visitors so it may be busy at times. In the summer it is open daily from 8.00 to 13.30 and 16.00 to 19.00 (bear in mind that these times could change).

All the photos in this report were taken in the winter time and there were no tourists around and no entry fee to pay for the visit of the monastery. But the museum and the church were closed. 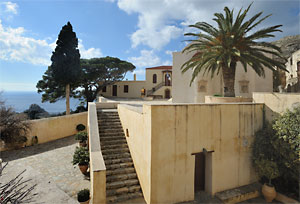 The monastery of Piso Moni Preveli ('piso' means behind, to the rear) is now usually referred to simply as Moni Preveli. It was built in the 17th century by Abbot Prevelis and was dedicated to Agios Ioannis Theologos, Saint John the Evangelist.

Outside the monastery by the large car park there is a small cemetery chapel and an ossuary in the shape of a church.

Shortly after you walk into the monastery you can see a modern fountain on the right hand side, a gift from grateful Australians for the help provided by the monastery during the German occupation.

The monastery is built on a terraced slope which means that it is on several levels. On the upper level there is a row of two-storeyed monastic cells. On the main level there is a large courtyard, a double-naved church dating back to 1837. To the West of the church stands the building which is used for official receptions and which used to house the museum before. Next to it, right opposite the church facade is a two- storeyed building in neoclassical style. It houses the old- reception hall, dining room, the kitchen and food cellars on the ground floor. The upper floor comprises a spacious room for official meetings and smaller rooms to accommodate guests.

On the lower level there is a fountain bearing the inscription (in palindrome form) dated 15th June 1701 which translates as "clean my transgressions, not only my face".

On the same lower level there are warehouses as well as vaulted stables which now house the museum where you can see the treasures of the monastery.

For more information you can visit the web site of Preveli Monastery.