If you are in trouble, do not hesitate to ask the Cretans for help or advice. Most will be very willing to help: it is part of the still deeply ingrained traditional hospitality.

European Emergency number 112 from mobile or fixed phones for all emergency services
Police: 100
Tourist police: 28210 73333 in Chania, 28310 53450 & 28310 28156 in Rethymnon
Fire brigade: 199
Ambulance: 166 (it could be a long wait if you are calling them from out of town)
Elpa: 10104 Elpa is the national car breakdown service, if you are a subscriber to a similar service in another country, you might be covered and won't have to pay any charges on presentation of your membership card. If you are not sure, give it a try anyway. Many car rental companies have a contract with either Elpa or another rescue service.

There are hospitals in the main cities. Emergency treatment is provided but you might have to provide the details of your health insurance (wherever you are insured). The hospital will recover their costs directly from them.
Hospitals on Crete have a bad reputation because some of them are rather old and crowded. The medical care, however, is MUCH better than what it is reputed to be. Most of the doctors will speak one or more foreign languages. The university hospital in Heraklion is a teaching hospital and has an excellent reputation.
A number of smaller localities have "health centres" for less serious problems. These are generally manned by a doctor and some nurses.

There are also private clinics in most cities which may give you quicker treatment than public hospitals. Their cost might be covered by our travel insurance but even if it doesn't, prices are comparatively low.

There are plenty of good doctors. Many have done some of their training abroad and will speak one or more foreign languages fluently. Most of the doctors are specialists. The concept of a general practitioner is quite new and there are only very few.
You will need to pay the doctor for a visit (in general it is pretty reasonable) and arrange for a refund through your health insurance by yourself if you are entitled to it. For some addresses go to doctors

First rate dental care at a fraction of the price! In times where most health insurance will only pay for the most basic dental care, it is worth thinking about having major dental work done here: you will probably save on what you would have spent on dental work in your country and have a holiday thrown in for free. For some addresses go to dentists

There is a surprisingly high number of them in cities. Pharmacies keep normal shop hours Monday to Friday. They are closed on Saturday. If you need a chemist on closing days or at night you can see which one is open (there are generally a couple in Chania, Rethymnon and more in Heraklion) in the list displayed in the window of every pharmacy. The list is in Greek however. The best solution is probably to take a taxi to the nearest one, the taxi driver should know where it is.

Not always that helpful, but there are exceptions. Language is also often a problem

If you have any troubles with restaurants, hotels, taxis, get in touch with the tourist police. Their job is to ensure that standards are maintained and that tourists do not get ripped-off. It is still a rare thing on Crete but it unfortunately happens. 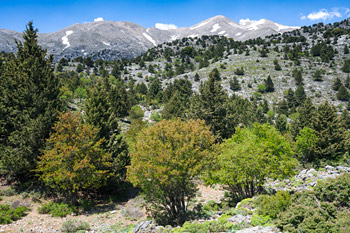