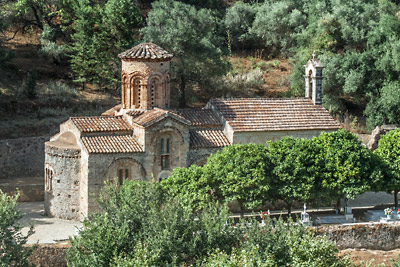 There are hundreds, if not thousands, of Byzantine churches and chapels on Crete. Some are over a thousand years old and many still house beautiful frescoes. The only really famous Byzantine church is the Panagia Kera (in eastern Crete) which attracts many tourists. Very noteworthy in western Crete is the church of Rotonda (which unfortunately seems to always be closed to the public in 2013).

Nowadays, most of these chapels and churches are kept locked and you will often have to hunt for the key in the village. Your best starting point is in the "kafeneion" where someone is bound to know its whereabouts. Please avoid asking for the key at "unsocial times" such as in the early afternoon where many people take a nap.

Take a look at Frescoes of Crete for a nice introduction to Byzantine frescoes.

Crete has a number of large monasteries. Monastic life has lost its appeal and only have a few monks (or nuns) still live in them. Below you can see the most famous monasteries in West Crete. 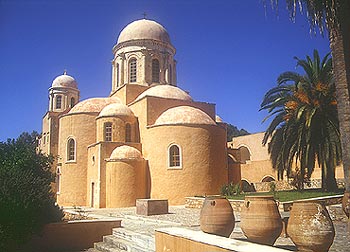 Collectively known as the monasteries of Akrotiri they spread over a large area on the northern part of the Akrotiri peninsula, to the East of the city of Chania.
Agia Triada used to be an important religious school and has enough space for several hundred monks, nowadays only 3 or 4 live there.

The ruined monastery of Katholiko which can only reached on foot is probably the oldest monastery in Crete (11th century?) and its ruins are very impressive, with a huge bridge still in perfect condition spanning a riverbed.

The monastery of Preveli is superbly located above the Libyan sea and also has a rich history of resistance against the Turks (who set fire to it) as well as the Germans during W.W.II (they plundered it in retaliation for helping the defeated Allied troops leave the island).
Beautiful church and interesting little museum. 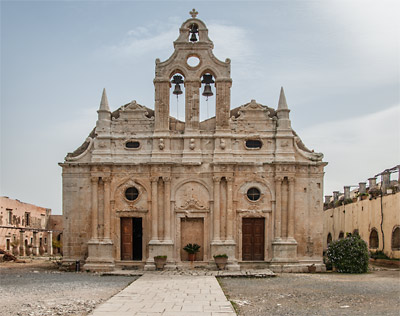 The 16th century monastery of Arkadi is located 22 km south-east of Rethymnon and possesses an impressive Venetian baroque church building. Its main claim to fame is however of more historical nature: in 1866, the Turks sent massive forces to quell insurrections on the island. Hundreds of men, women and children fled their villages and took shelter in the monastery. When 2000 Turkish soldiers attacked the building, rather than surrender, the Cretans set alight a store of gunpowder. The explosion killed almost everyone, Turks included.
Arkadi remains a symbol of Cretan defiance against those who want to subdue them.