The Byzantine church of Rotonda 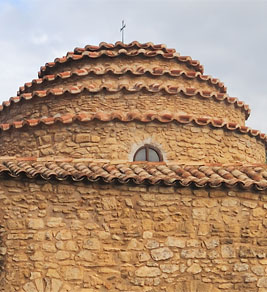 The Byzantine church of Rotonda also called the church of the Archangel Michael is located around 10km to the South of Kolymbari near the village of Episkopi.

To reach it from the North take the Kolymbari exit on the National Road and drive towards the South, following the signs to Spiia and Deliana. About 3km after you pass Spilia and Drakonas you will come to a sign pointing at Episkopi (right hand turn, the sign appears quite suddenly after a curve so make sure that you don't miss it). A little further along the road branches to the left and the church of Rotonda located below the village. You can park your car right by the church.

The church was originally built in the 6th century during the first Byzantine period and became the seat of the Bishop of Kissamos during the second Byzantine period. where it was extended. Its stepped dome with five concentric rings is unique in Crete (and very rare in Byzantine architecture). You can open an image of the information board for the Rotunda church here..

Graves from the early Christian era have been excavated on one side of the church.

The church has beautiful frescoes ( there seem to be 3 layers which were painted between the 10th and 12th century) but it looks like the church is closed most times so you might not get a chance to see them.

On the way to the Rotonda you can also visit the chapel of Agios Stefanos located nearby.

Photos of the church of Rotonda 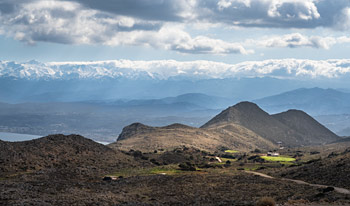