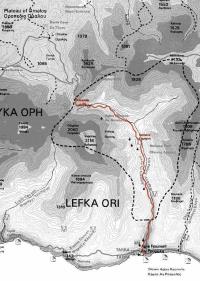 The first section of the walk is by far the most difficult one because it descends steeply. Even though the steep path is well built and maintained most accidents - mainly sprained ankles - happen here because it is easy to slip on the stones that are used for paving the path. It is also quite hard on the knees if you are not a regular walker.

Once you reach the gorge bottom things ease off but you still have a long (13 km) way to go on a stony path.

Click below for more detailed description of each of the sections of the walk . 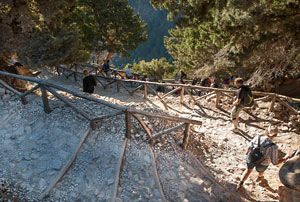 The starting point of the walk through the gorge of Samaria is at Xyloskalo, which is also the entrance point into the National Park. The name Xyloskalo means "wooden staircase" (or ladder) and originates in the fact that in the past, the inhabitants of the gorge had built a sort of staircase out of pieces of wood and tree-trunks in order to get in and out of the gorge. This is because the entrance of the gorge is a very steep drop which would otherwise have had to be climbed.
Today, there is a stone path winding down steeply for the first 2 km, with a wooden parapet to prevent accidents. You still need to step very carefully because due to the amount of visitors many of the stones are worn smooth and are slippery. Most accidents tend to happen on these first two km. This part of the walk is also taxing on the knees.
The altitude at Xyloskalo is 1230 m and most of the walk is in the shade so that the heat is not an issue at the beginning. In fact, if you get there early in the morning you might even feel cold.

After about 1,7 km (the 13 km through the National Park are marked by milestones every km) you arrive at the first rest place and spring, Neroutsiko.
From then on the walk down becomes a little less steep and eventually you reach the bottom of the valley. Still walking in the shade you will cross the riverbed (there probably won't be any water) two or three time until you arrive at another tributary coming from the East (with a fair bit of water). A few minutes walk further on is the rest place of Agios Nikolaos, with water, toilets and a guard post. This is a very ancient place where there was a temple of Apollo. The cypresses standing there are the tallest in Crete. You have now been walking about 4 km. 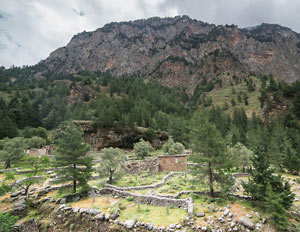 From Agios Nikolaos to Samaria (3,7 km), you will cross the river several times and pass two springs where you can refill your water bottle. This is an easy part of the walk, in the shade and the path is pretty smooth. After climbing up a little and walking a while above the river, you go down into the riverbed again and after a few hundred meters walking in pebbles you reach the village of Samaria, across the wooden bridge on your left.
Samaria is the main resting place for most walkers, with shade, benches, water, a guard post and a doctor (the last one is in theory only, there has been no doctor for the past few years) .
Take a walk around the ruined village. If you walk quietly, you are very likely to see a few "kri-kri" at the edge of the village, especially young ones. They get quite used to people and are not very shy.
My advice is that you do not stop for more than half an hour, unless you are a practiced hiker, because otherwise your legs might start seizing up and you will find walking again difficult.

The village of Samaria was inhabited until 1962, at which point the National Park was created and people where forced to leave. It had been inhabited for thousands of years by wood-loggers (there are some remains of sawmills in the gorge) and was also a place where the partisans fighting the Turkish invaders could retreat. During the winter Agia Roumeli is not accessible through the gorge because there is far too much water in the river. There was only a difficult mountain path leading from Samaria to the sea. So when you sit in the village of Samaria, have a thought for what life must have been for these people. 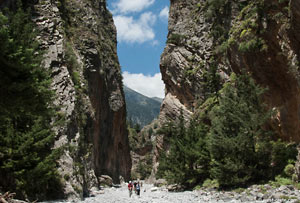 To carry on with the walk you need to cross the bridge again and turn left. Less than half an hour later the walk takes you into the riverbed again. This is the beginning of the gorge proper. At the point where you walk down into the riverbed you will see a sign warning you about stones falling. The danger of stones falling (from as high as 500m!) is very real, especially when a high wind blows in the mountains or if it has been raining recently. Of course there is very little that you could do if a stone fell on your head (it has happened but it is very rare) but you can minimise it by not stopping for a rest just below a vertical cliff.

For the next hour (or two depending on your pace) you walk mainly in the riverbed (it can be tiring on your feet if the soles of your shoes are thin), crossing the river on stones or makeshift bridges a number of times. The cliffs tower above you. This is without doubt the most impressive part of the walk.

At km 11 you arrive at the shaded clearing of Christos, where you will find the last spring. 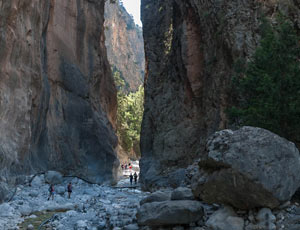 A few minutes later you get to the "Gates", this very famous and very narrow part of the gorge. It must be one of the most photographed place in Crete but it is probably less impressive than the gorge between km 8 and 10. You will often have hold-ups passing this narrow part, especially if you get there around midday because people also come from Agia Roumeli to see it.

Once through the "Gates" the gorge widens considerably and after another 2 km you reach the guard post (where you must surrender your ticket stub) and are out of the National Park and in the old village of Agia Roumeli. It was destroyed by a flood in the 1950's and consists mainly of ruined houses which are now slowly being rebuilt.

From then on, the path is very easy: flat and no stones but also no shade. If you get there in the summer at noon you will often encounter very hot conditions. But soon you see the sea ahead of you and get to the new village of Agia Roumeli and the cooling sea.
In the last few years it has also been possible to take a minibus shuttle for the last 2km (the price in 2014 is Euro 1.50)

Walking up the gorge instead of down

It is of course to walk UP the gorge of Samaria. You will need to spend the night in Agia Roumeli and start from there in the morning. Even though it is a long ascent of 1230m walking up might be preferable for people with knee problems.

You need to consider the fact that you will encounter everybody who is walking down the gorge in counterflow and that's really not desirable. You will avoid this by starting very early (8.00 at the latest) in the morning from Agia Roumeli. This way you will meet almost no one until you get to the half way point at the village of Samaria. Make yourself comfortable in Samaria and wait until at least 13.30 or 14.00 when the flow of walkers coming down will dry to a trickle. At that point start again and walk the second part of the gorge. That way you will have avoided almost all walkers.

What to take with you on this walk? 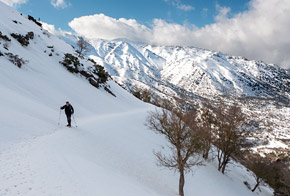 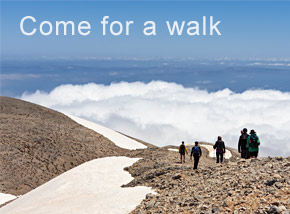