Geology and formation of the Samaria gorge 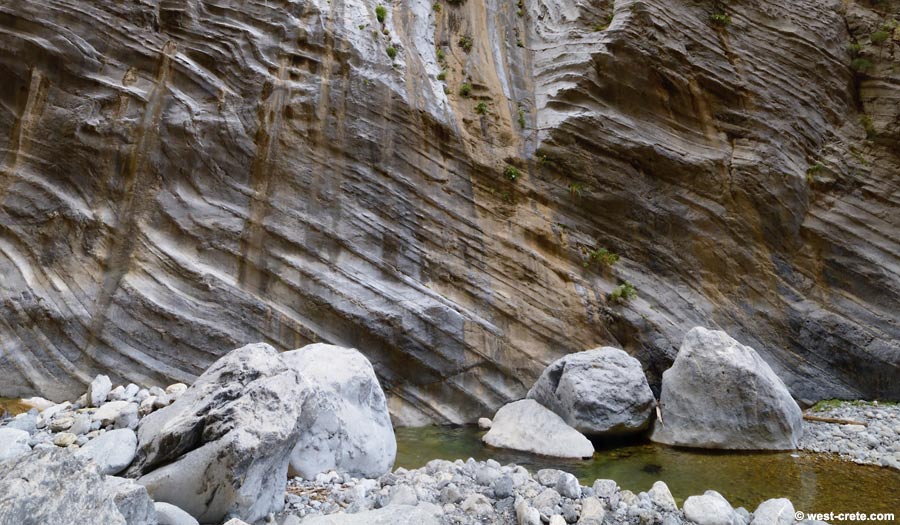 The geological upheavals of the early Miocene, 25 million years ago, led to the emergence from the sea of Aegeis, a continuous stretch of land which linked south-east Europe and Asia Minor. In the middle Miocene, Aegeis had high mountains and also dips filled with water. The flora grew to such an extent that by the late Miocene (14 million years ago) Aegeis was inhabited by large herbivorous mammals.
In the late Tertiary (10 million years ago) the waters of the Mediterranean began to inundate Aegeis, forming the islands of the Aegean and Crete. Eight million years ago Crete was already surrounded by water.
In the Pliocene epoch (1-3 million years ago) there was a constant process of rise and fall of land, and a deep tectonic rift was created in the Cretan sea, approximately in the same position as it is today.
Geological upheavals in the area once occupied by Aegeis continued throughout the Pleistocene (1 million to 25.000 years ago) in which there were successive warm and cool periods caused by the gradual spreading and retreat of the glaciers. As a result, the level of the sea rose and fell, creating bridges between Crete and the adjacent lands over which the island was colonised by animal and plant species.
Today, southern Crete is 3.65 metres higher than the north of the island. The line of the former sea level can be seen clearly in the cliffs along the south coast. Scientists believe that these upheavals were caused by the pressure which the African tectonic plate exerts on the European plate.

The Samaria gorge was created during the Quaternary period. The dolomite beds of which the rock formations of the area are composed have been fractured by a variety of factors (glacial action, karstic phenomena etc.) which are particularly marked in the Gingilos area as well as around the 'Gates'.