Greek cuisine as a whole has been very strongly influenced by Turkish and Middle Eastern cuisine and if you are familiar with anyone of them you will quickly find your way around a Greek menu.

Befitting its reputation as a fiercely independent island, Crete is self-sufficient in year-round fresh fruit and vegetables, as well as in seafood, and proud of its culinary traditions. Though unsophisticated, Cretan food is solidly good, guaranteed to fortify you for the next rebellion or family vendetta. There is nothing delicate or precious about the cooking. Fish is usually baked or grilled with nothing more elaborate than a sauce of oil and lemon, the meat - traditionally lamb or goat - is grilled or cooked as a stew. Spices are minimal: maybe a little pepper and some local herbs.
What is of prime importance is not so much the quality of the cooking (and certainly not its fanciness!) but the quality and freshness of the individual ingredients: the oil (always olive oil) must be the best, the fish very fresh, the meat tasty and the vegetables preferably just picked from the garden. Then and only then can a meal have the potential of being a good meal.
Don't expect much in way of dessert. Traditionally, Cretans may eat some seasonal fruit.

Cretan specialities are the local graviera cheese (a kind of gruyere) and myzithra, a creamy white cheese often served instead of feta in the common Greek salad of tomatoes, cucumbers, peppers and onions.

Lunch starts at 2 - 3 pm and is often followed by a short nap, especially during the hot summers. Dinner is usually eaten around 9 - 10 pm. Restaurants serving meals to tourists will of course serve food earlier (both at lunch and dinner) meaning that you can eat closer to the times that you might be accustomed to.

A description of common dishes

Fresh fish is not cheap because the Mediterranean has been depleted by overfishing. The "better" fishes are charged per kg in restaurants and the price is around Euro 40 to 50 per kg. Some very nice smaller fish types are still pretty affordable and just as tasty. 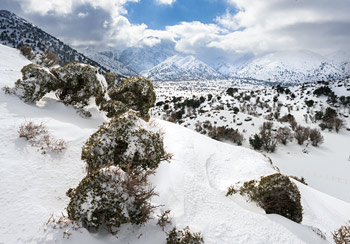