The beaches west of Chania

A long sandy beach stretches to the West of Chania for many kilometres. Once almost uninhabited, this part of the coast has become the main tourist concentration in western Crete. The communes (they really cannot be called villages) of Stalos, Agia Marina and Platanias form a long succession of hotels, apartments, eateries, bars and tourist shops. The beaches are good but can be crowded.

Georgioupolis and itsr long (9 km) sandy beach on the north coast is following the same destiny as the beaches west of Chania: one hotel after the other is being built between the main road and the beach. Some stretches of the beach, particularly the eastern end are still pretty quiet. 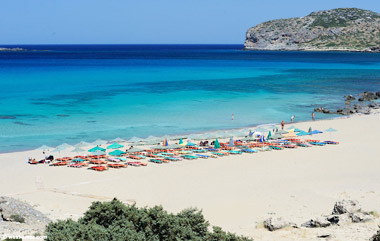 Falasarna on the west coast of Crete is a nice beach with beautiful water. Beach umbrellas and their accompanying paraphernalia have sprouted there as well. It's still a really nice spot if you can avoid going there on windy days and the beaches are big enough to not feel crowded, even on busy days. 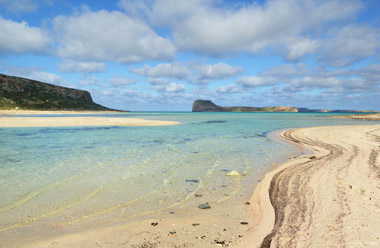 Gramvoussa, or more exactly Balos Bay which is at the tip of the westernmost peninsula of Crete, was long a secret spot, only accessible by private boat or a long walk. Magical turquoise waters, lagoons, beaches of pure white sand.
Its discovery by more and more and the improved accessibility (daily boat excursions from Kissamos as well as a good dirt road leading close to the beach) brought crowds during the day during the summer months
It is still an amazing spot but is far more enjoyable out of the tourist season.

Sougia beach, although it is a pebble beach, is one of the best beaches for several reasons: being 1200 m long and located by a small village it is never crowded, there are no beach umbrellas (but the inhabitants of Sougia have thoughtfully provided a few showers), nudism is tolerated on a large part of the beach, the sea and the beach are very clean, the surrounding landscape is beautiful, the pebbles are fine so not at all uncomfortable to lie on. More on this still special place here. 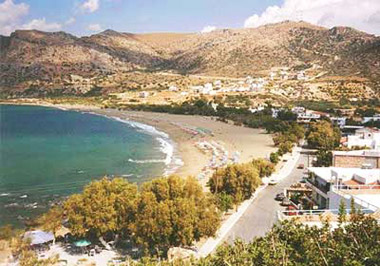 Paleochora differs from many villages on the south coast of western Crete in that it is a large village where Cretans live and work all year around.
Its popularity with foreigners goes back to the hippy heydays of the 1970's . Nowadays, many more visitors come to spend their holidays in Paleochora but they are still, on the whole, more of the individualist type.
The village is not pretty but its long sandy beach is superb (although it's often windy) and there is a good choice of hotels, rooms for rent, good restaurants and pleasant bars. 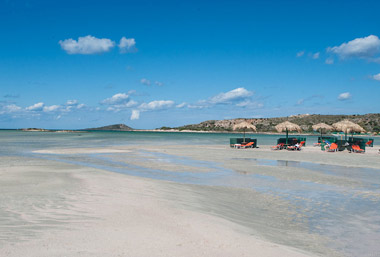 Located at the south-west corner of Crete, Elafonisi was long a well-guarded secret: crystal clear turquoise water, red and pink coral sand and not a soul in sight. Nowadays, boats, tour buses and a multitude of rented cars go there every day, the beach is lined with umbrellas and the atmosphere has gone. It's still a spectacular spot though and you can escape the crowds by walking away from them a little.

Plakias has grown tremendously in the last two decades, from a tiny fishing village to a destination for package tours. The neighbouring "hot tips" such as Damnoni have gone or are going the same way. Many still like it, probably because of the beautiful landscape.